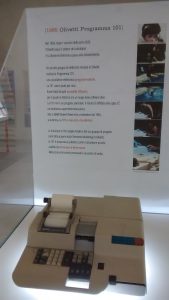 The Programma 101, or P101, was the first personal computers in the world, developed by the Italian company Olivetti in the years between 1962 and 1964 and produced between 1965 and 1971.
Designed by engineer Pier Giorgio Perotto (in homage to which assumed the name of Perottina) with Giovanni De Sandre and Gastone Garziera, the P101 was introduced for the first time in 1965. In addition to having a futuristic design, the P101 was the first commercial computer to be digital and programmable, smaller and cheaper: the first personal computer.